More than 100,000 pages of documents exposing how the chemical industry and government regulators knew about the extraordinary toxicity of many chemical products, yet worked together to conceal this information from the public and the press, were made publicly available last week through a remarkable project called the Poison Papers.

This morning, a second group of important documents reached the public for the first time after a judge allowed, for the first time ever, the public release of hundreds of pages of incriminating documents regarding Monsanto and its collusion with federal regulators to keep secret scientific evidence of the toxicity of Roundup, the world’s best selling  –and most controversial—herbicide.

Today, critical documents released by the law firm of Baum Hedlund, which is suing Monsanto in a California federal court are available at the firm’s website here under the headline, “Monsanto’s Secret Documents.”

Robert F. Kennedy Jr. noted that with this disclosure, “We can now prove that all Monsanto’s claims about glyphosate’s safety were myths concocted by amoral propaganda and lobbying teams.”  Kennedy noted that federal agencies that were supposed to protect public health instead protected Monsanto’s toxic products from public oversight.

Robert F. Kennedy, Jr.  explained, “Monsanto has been spinning its lethal yarn to everybody for years and suborning various perjuries from regulators and scientists who have all been lying in concert to American farmers, landscapers and consumers. These new revelations are commiserate with the documents that brought down big tobacco.”

Today’s important disclosure, said, Baum Hedlund attorneys Brent Wisner, “is a look behind the curtain” demonstrating that “Monsanto has deliberately been stopping studies that look bad for them, ghostwriting literature and engaging in a whole host of corporate malfeasance. They have been telling everybody that these products are safe because regulators have said they are safe, but it turns out that Monsanto has been in bed with U.S. regulators while misleading European regulators.”

The incriminating documents from the class action lawsuit against Monsanto follow less than one week after the Poison Papers released some 200,000 pages over a public interest website facilitated by the Center for Media and Democracy and the Bioscience Resource Project. As further described in The Intercept here, these documents stem from 40 years of courageous Freedom of Information requests regarding lawsuits against Monsanto, Dow, DuPont, the Environmental Protection Agency, the U.S. Forest Service, the Department of Defense, and pulp and paper companies.

According to Poison Paper’s lead journalist Peter von Stackelberg, this treasure trove of evidence, “lays out a 40-year history of deceit and collusion involving the chemical industry and the regulatory agencies that were supposed to be protecting human health and the environment.”

Among the alarming revelations, a document from 1985 showed that Monsanto had sold a chemical (santophen) that was tainted with TCDD (dioxin) to the makers of Lysol, who, apparently unaware of its toxicity, used it as an ingredient in their disinfectant spray for 23 years. Dioxin was a contaminant in Agent Orange that caused major health issues.

Monsanto’s analytical chemist, Fred Hileman, testified that Monsanto knew that Lysol is recommended for cleaning babies’ toys and for various other cleaning activities involving direct contact with the human body. Hileman testified that he knew people who used Lysol were contacting three parts per billion of 2,3,7,8 and that 2,3,7,8 is extremely toxic. There was no dioxin warning on the Lysol package.

The Papers reveal Monsanto chief medical officer George Roush admitted under oath to knowing that Monsanto studies into the health effects of dioxins on workers were written up untruthfully for the scientific literature in order to obscure health effects.

In 2012, Monsanto agreed to pay up to $93 million in a class-action lawsuit brought by the residents of Nitro, West Virginia, for dioxin exposure from accidents and pollution at an herbicide plant that operated in their town from 1929 to 2004. While details of the case were kept secret, plaintiffs presented evidence that Monsanto had willfully withheld information from U.S. and Canadian government agencies, and its customers, regarding high TCDD contamination of many of its products, including santophen (which was declared safe by Industrial Bio-Test Laboratories – see below).

The U.S. Forest Service sprayed both toxic, dioxin containing 2,4,5-T and the other herbicide in Agent Orange, 2,4-D, to kill weeds, even after children developed nosebleeds, bloody diarrhea, and headaches, women had miscarriages, and animals died or had bizarre deformities. Researchers later discovered the EPA’s registration of 2,4-D and other pesticides was based on fraudulent data.

In what was described by investigators from the US Food and Drug Administration (FDA) as, “the most massive scientific fraud ever committed in the United States, and perhaps the world,” the leading safety testing company, Industrial Bio-Test Laboratories (IBT), was revealed to have falsified 99% of long-term studies (for cancer, birth defects, reproductive damage etc.) supporting some 483 pesticide registrations.

The wholesale fraud resulted in the indictment of the company’s president and several top executives in 1981 and prison convictions in 1983.

One Justice Department investigator noted: “IBT became the largest testing lab in the country, because companies knew this was the place to get the results they wanted.”

New animals were routinely substituted for test animals that died, without noting deaths or substitutions in lab reports; entire test data and lab reports for one test product were copied into reports for other products; and signatures of lab techs who had refused to sign false reports were forged by managers.

To help secure approval for Monsanto’s TCC, an anti-bacterial agent widely used in popular deodorant sprays, Monsanto toxicologist Dr. Paul Wright left in 1971, to briefly work at IBT. Prosecutors said Wright went to IBT to manage Monsanto’s contract to test the safety of TCC, which was under suspicion by the FDA for causing testicular atrophy in laboratory rats fed the compound.

Monsanto needed a “clean” IBT study to convince the FDA that TCC was safe so the agency would grant them a registration to increase the levels of TCC in deodorant soaps.

Back at Monsanto, according to prosecutors and witnesses, Wright wrote several critical sections of the final TCC summary report and pressured a key IBT scientist into changing his finding that TCC caused testicular atrophy in laboratory rats. The FDA eventually approved new higher levels in some deodorant soaps.

“It was my opinion at that time, and is today, that postmortem data were removed from the report, because they incriminated the TCC compound,” Dr. Donovan E. Gordon, IBT’s pathologist Gordon told a grand jury.

Millions of pounds more of TCC were manufactured each year by Monsanto as a result. About 80% of all antimicrobial bar soap sold in the United States contained TCC. On September 2, 2016, the FDA announced that TCC must be removed from all antibacterial soap products by late 2017.

How did the EPA respond to the fallout from the IBT fraud trial?

A transcript of a 1978 meeting with the EPA’s Fred Arnold, Acting Branch Chief of Regulatory Analysis & Lab Audits and chemical company representatives, reveals the companies were assured that no chemicals would be removed from the market, even though the studies supposedly showing their safety had been proven fraudulent.

Author/activist Carol Van Strum, who compiled most of the Poison Papers, notes: “This document was the linchpin of my book, A Bitter Fog: Herbicides and Human Rights, documenting the government’s acceptance of phony industry studies while dismissing reports of human illness, death, involuntary abortions, birth defects, and other effects of pesticide exposure.”

Almost all of the products tested by IBT, including 2,4-D, glyphosate, and atrazine are still on the market today.

“Most chemicals enter the market without testing,” says former EPA scientist Evaggelos Vallianatos. “EPA’s perverse definition of inerts conveniently covers-up science and enables (uses) of chemicals that, together, are many times more deleterious than the ‘tested’ ‘active’ ingredient….”

IBT wasn’t the only lab conducting fraud. Craven Laboratories in Texas, was also investigated. In 1994 that the owner and 14 employees were found guilty of falsification of research data. Craven performed studies for 262 pesticide companies including Monsanto, conducting 9 of the 15 residue studies needed to register Roundup.

Monsanto’s flagship product Roundup has also come under suspicion by those who question the EPA’s blanket approval. Carol Van Strum discovered that IBT found giant multi-nucleated cells in the testes of rabbits exposed to Roundup, suggesting a hazard of birth defects, mutations, and cancer.

She found that significant portions of the Roundup data submitted to support registration were invalid. “Virtually all of Roundup’s toxicological registration data resulted from studies performed by Industrial Bio-Test Laboratories,” Strum writes. The registration had been a closed process without scientific peer review or public participation, and the publicly available information on toxicity is extremely limited. “At least a dozen IBT studies on Roundup were found to be invalid.”

For many years no one knew exactly what other chemicals were in Roundup besides glyphosate or how they affected our health. Last year The Intercept reported on the work of molecular toxicologist Robin Mesnage, who isolated Roundup’s ingredients and discovered that the supposedly inert ingredients in the pesticide formula were more toxic than glyphosate alone.

Not only did these chemicals, which aren’t named on herbicide labels, affect biological functions, they did so at levels far below the concentrations used in commercially available products. In fact, POEA – officially an “inert” ingredient – was between 1,200 and 2,000 times more toxic to cells than glyphosate, officially the “active” ingredient. POEA, is one of a class of chemicals developed as spermicidal agents. According to an FDA press officer, the agency has no plans to test food for POEA or other additives.

In other Poison Papers revelations, two documents detail experiments that Dow contracted a University of Pennsylvania dermatologist to conduct on prisoners in the 1960s to show the effects of TCDD, a particularly toxic contaminant found in 2,4,5-T. Another, from 1990, detailed the EPA policy of allowing the use of hazardous waste as
inert ingredients in pesticides and other products under certain circumstances.

According to Dr. Jonathan Latham, Director of the Bioscience Resource Project, which helped bring the Poison Papers to light, the result of the “enduring collusion” between the EPA and the chemical industry “is a systemic failure to protect the American public from chemical hazards.”

Under the current Trump administration the EPA’s pesticide-approval process has become little more than a rubber stamp for the chemical industry.

At a meeting in May at the EPA’s Office of Pesticides Program, Lori Ann Burd, environmental health director at the Center for Biological Diversity blasted efforts to weaken safeguards – “For the sake of inflating profits for pesticide giants, EPA chief Scott Pruitt is willing to ignore that these poisons harm brain development in children, increase cancer risks, contaminate our water and kill endangered wildlife.” 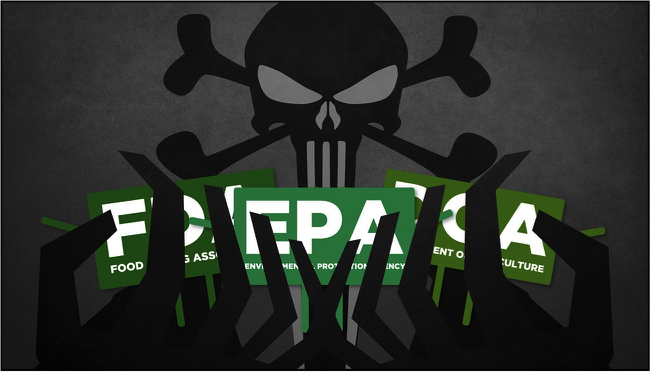 Jon Woodhouse is the Managing Editor of The Maui Independent. Moving to Maui 42 years ago, he feels blessed to live here. He writes about music for The Maui News and worked for the Hawaii Department of Education up until late 2019.
Previous Post
Next Post