This November’s mayoral and Council election finds Maui at a critical crossroads. Voters could allow the old guard, in the pockets of major developers to continue to dominate our County government. Or we could welcome a breath of fresh air with high integrity progressive candidates who care for our environment, seek sustainable, smart growth, and encourage transparency in government.

It really comes down to a simple question – do we need more shopping malls, more commercial space, and more luxury homes on Maui.

A new study on building and development on Maui during the past 20 years reveals the shocking fact that 99% of development has been hotels, condos, commercial space, and luxury homes. Only 1% has been affordable housing.

Why? Because we have a group of Council members in bed with major developers, and their election campaigns are primarily funded by development interests. That’s why candidates like Mike Victorino, Alan Arakawa, Yuki Lei Sugimura, and Riki Hokama receive much higher campaign donations than their rivals.

Do we want to continue runaway development on Maui or would we rather elect candidates like Elle Cochran for mayor, who has championed affordable housing, sustainable/regenerative agriculture, and the needs of working families?

Maui mayoral candidate and former Council member Victorino has denied he’s swayed by big donor influence.  “No one influences Mike Victorino, except my lovely wife, Joycelyn Victorino,” he announced at a Kula Community Association meeting. “I don’t need to be influenced by anyone. I will do what is right for the people.”

And just in case some folks were skeptical, he added the kicker – “When tutu comes into my office, she gets the same respect, if not a little more, than a big corporation,” he suggested.

During the 2018 Maui primary, Victorino drew massive campaign donations – more than $138,000 – from developers and allied industries, which allowed him to blanket our island with media advertising.

We can only imagine how much more he is raising now as campaign fundraising amounts for the November election will not be posted until one week before the election date.

One Oahu family stands prominently as a major player in funding political campaigns on Maui. They are the Choys and they run Honolulu’s H2O Process Systems, which was awarded contracts for $93,000 by our County in January and $98,000 in April.

Jarret Choy gave $3,000 to Victorino and $2,000 to Alan Arakawa in May. Jarret J. Choy gave $2,000 to Riki Hokama in May, while 20-year-old Lacie Choy (listed as an unemployed student on campaign reports), managed to donate the maximum contribution allowed by law, $2,000, to Riki Hokama.

In the same month, Liann Choy (the company’s secretary) gave $2,000 to Yuki Lei Sugama. And Yuki Lei was also the lucky recipient of $2,000 from Milton Choy. Milton also seems to like Alan Arakawa, ‘cause he also got $2,000 in May. And not to be outdone Milton J. Choy handed out $2,000 to good old boy Riki Hokama.

So that’s a grand total of $20,000 from just one Oahu company that received (and likely expects to receive more) major County contracts, donated in just one month to Maui’s pro-development council members.

The Choy’s have handed out so many thousands of dollars to politicians across the state this year to raise red flags.

Back in 2003, SSFM International president Michael Matsumoto was convicted of felony money laundering to Hawaii politicians. One of the state’s largest engineering firms allegedly operated a slush fund to funnel thousands of dollars in campaign donations to local politicians, according to the state Campaign Spending Commission.

At the time Maui Mayor James “Kimo” Apana collected about $30,000 from people linked to SSFM. The 130-employee firm has received millions of dollars in no-bid contracts from state and county agencies.

As chairman of the County Budget and Finance Committee, Riki Hokama has been the lucky recipient of donations from businesses that have been awarded major local government contracts.  Over 50% of the $30,150 he collected through the August primary from campaign contributions of $100 or more came from donors that  received over $2 million in Maui County contracts.

As the chair of the committee, he has a huge influence on county spending and it seems a bit of a coincidence that such a significant amount of his funding is connected to these contracts.

In Hawaii, it is illegal for companies to use their own funds if they have entered into a state or county contract, but it doesn’t prevent the president, CEO, secretary etc. from making donations. Some states have taken to steps to bar those contributions as well.

Meanwhile, a lobbying group for timeshare owners is seeking to influence this critical election with bundles of campaign cash. It is backing old guard candidates as the so-called, “One Ohana Political Action Committee,” a name that seems designed to trick voters who have supported reformers committed to public interest government on the “Maui Ohana” slate.

On their website, they claim: “We are a coalition of timeshare owners who live on Maui. We are individuals and families who have come to embrace the Maui way of life.”

The suspiciously named Old Guard boosting time share lobbying group has handed out an astonishing total of $130,000 in the month of September to Council candidates intent on representing establishment business interests – Riki Hokama, Stacy Crivello, and Lynn Decoite, along with “No one influences Mike Victorino.”

Update 10/18: Victorino just received the highest fine by the Campaign Spending Commission among candidates for either failing to file electioneering statements or missing filing deadlines. He was fined $2,800, which was reduced from the original figure of $8,000. It was the largest electioneering fine paid by any political candidate in the state this year. 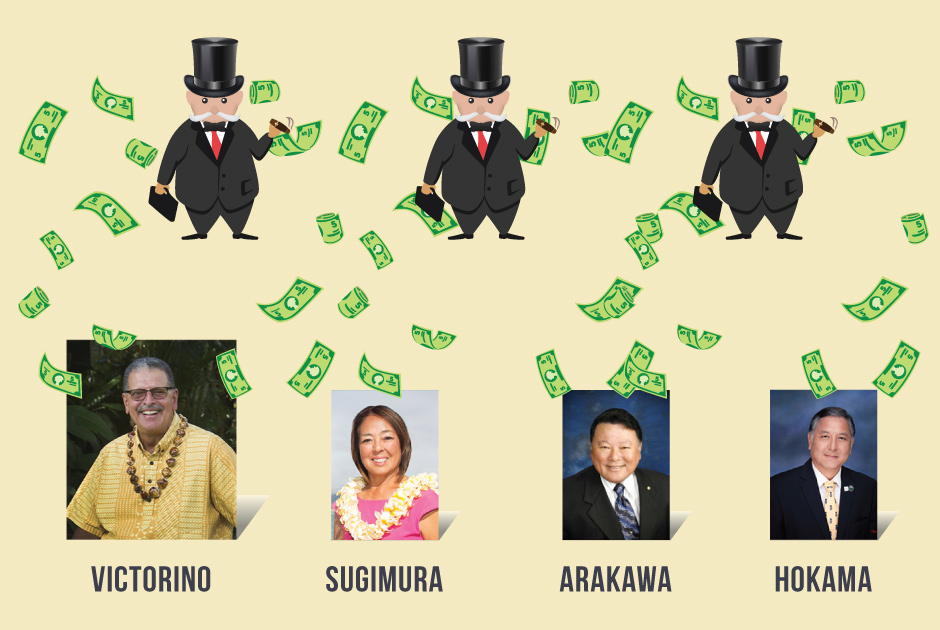