Council Member Elle Cochran, who was the top vote-getter in the 2016 Maui Council election, is running for mayor this November on a platform of revolutionizing County government to create a new culture of transparency and effective collaboration.

“Elle,” as she is widely known, makes no secret of her intention of sweeping away a plantation-mentality local power structure that she believes has supported runaway development and stifles meaningful change. A threat to the power elite, she has refused major developer campaign donations while bravely exposing corruption, lifting the lid on the entrenched system which has run Maui’s county government for decades.

Maui’s “old guard” has been so intent on thwarting the influence of Elle and the Ohana candidates they rigged the council, and council members like Mike White and Riki Hokama have prevented her from holding essential Infrastructure and Environmental Management meetings by regularly failing to show so there’s no quorum. More recently current Mayor Alan Arakawa has attempted to demean her in a radio interview.

The following interview with Elle was conducted on October 10.

Question: What inspired you to get into politics?

Answer: “It started with the Save Honolua Coalition that I founded and having to go to council meetings and realizing the decision makers had a lot to do with whether Honolua would be protected or developed. So I decided to run for office. I got in and have been there for four terms and now I want to keep the momentum in government going and jump into the mayor’s race.

Q: If you were elected mayor what changes you like to see on Maui?

A: “I know we can do better and I know it’s about open communication and having a mayor that works hand in hand with the council, collaboratively and openly, because right now the doors are slammed. Literally, there have been memos that say departments can’t speak to council members. I can’t call Public Works and say there’s an issue on
a road in Lahaina. I have to type a memo to Mayor Arakawa and he sends them the question. This has been going on for years.

“My office called the Office of Information Practices and asked is this legal? Can he really do this? They said no, council members are the voice of the community and he can not hinder you from doing your job. “What kind of power trip is that? How can you be effective and productive?

“Our civil service people know the ins and outs, they know what’s been working and what hasn’t been working. I want to take out the fear of revenge and retaliation on the job site. That’s happening right now on a lot of levels because there’s corruption. People will put their head down and be quiet. It’s not right.

Q: One of the issues we face with the demise of the sugar plantations is the future of agriculture on Maui?

A: “I think the sky’s the limit. The future of agriculture is bright. Diversification for sure. We have all the resources to be a role model for the rest of the world in sustainability for food, for renewable energies, for medicinal things, and hemp for building supplies and native woods. We have year-round growing seasons.”

“We need reforestation, up in our watersheds with native trees, to bring back the life, bring back what grew here.

“And I’m tired of hearing excuses. (Adopting an old cynical voice) – ‘The average age of farmers is 65, everyone’s too old, the young kids don’t want to work. There’s no water.’ Excuse after excuse. This is the excuse of supposed landowners. And I use that term lightly because I do not believe that the people who claim to be large landowners
truly own all the land they claim, like A&B, Maui Land & Pine and a lot of ranching companies.

“A&B has turned into a real estate company. What part of ag is that? There’s no ag in their plan, but they want to say that to the public, the little people. But when you go to their shareholder meetings it’s a whole different story. It’s commercial, industrial, we’re going to be boosting your investment.

“A&B are just running us through the ringer and leaving us with contaminated lands and they still control the water. All these things will be visited. I’m going to right the wrongs that have been done to the people.”

Q: Would you support a ban on Roundup?

A: “Yes. There’s a better way. Going back to agriculture and farming we can do it without pesticides. I did a goat pilot project, and I got our county parks department to do five pilot parks pesticide free. You don’t know how hard that was to get done. I just saw the contracts for all the pesticides and chemicals we bought last month and it was half
a million dollars. Let’s take that away and not poison ourselves. It’s a win-win.

Q: How do we balance the growth of tourism?

A: “I feel we’re out of balance, even as a people we’re out of balance, and with percentages of visitors and our residents. There has to be a re-balance. I’m talking about managing tourism. We need to stop and reassess. We need to take a pause. We’re being loved to death in many ways, our dive spots, surfing spots, hiking spots, and fishing spots. We’re killing the goose that lays the golden egg. Our environment really is our economy and it’s not too late. We’re at a tipping point, a very critical time where we can restore and bring things back.

Q: Why do you think the old guard candidates, like Mike Victorino, are receiving far more donations than you and the Maui Ohana candidates?

A: “Because the name of their game is I give you all this money and you, in turn, will do my bidding and you will be beholden to me because I helped you win your seat. The unions played a part in our history with the plantation and making sure about safety and
living wages. I don’t see all of them truly walking their talk, but Local 5 union does here. I was just picketing on their strike line (at the Maui Sheraton) because they are fighting for their workers and I was behind them.

“So I was told Elle you can take the money and get the endorsements but just remember they do come knocking on your door for favors, and I chose not to. And that’s what I’ve done since day one.”

Q: It’s amazing when you look at the big companies who have donated to Mike Victorino and all the county contracts they have received.

A: “It’s multi-millions of dollars, and that’s just the tip of the iceberg. It’s a good story to investigate. I’ve been on the council for 8 years and didn’t realize that we don’t ever see the final numbers of the budget, and we don’t get tracking reports.

A: “And that got cut in half, Riki (Hokama) wanted $80-90 million. Are you kidding me? Ninety million for parking? Then you look at the companies, consultants and planners, who all this money is going to be given to for these project and that’s where all the connections come in to play.

“I fought that Kihei Wastewater Reclamation Facility grit system upgrade, a ridiculous $6.5 million item in our budget that should not have even been there. Technically it only costs $250,000 to sweep up the grit every four years or so. The original report said the cost is minimal just keep doing what you are doing. Then the Department (of Environmental Management) did another report and the person who did that report actually got the contract to do the facility. How did that happen?

“That’s just one example of ‘let’s keep the funding to our buddies going and waste taxpayer dollars.’ Meanwhile we can’t keep the landfill open for another hour.”

Q: There’s been some obvious obstructionism on the council, with members not showing up to your Infrastructure and Environmental Management meetings which you chair (Hokama has attended only 3 of 13IEM meetings in 2018), and Alika Atay’s emails being blocked about Water Resources Committee meetings he chairs. It seems like a tactic
to derail the influence of reformers.

A: “Yes. It makes it sound like we’re ineffective and we can’t get any work done, yet it’s not our fault. I’m trying to schedule Infrastructure and Environmental Management meetings to get work done that the community is asking for, or that departments are needing, and because I can’t get a quorum I can’t do the work. We can’t vote on things, we can’t pass things.

“At the Kula forum Riki was asked, ‘will you show up for the rest of the term for the IEM meetings,’ and he said, ‘I have devices. I have a phone, TV, computer, just because I’m not at the meetings it doesn’t mean I don’t know what’s going on. That’s not the point. The point is you show up physically. It doesn’t help the public for you to sit and watch us on TV.”

“I got extremely frustrated that three meetings in row people didn’t show up. If I knew people couldn’t show up I would have met another day so we could get a quorum, but I was not told. So I open the meeting and wonder where is everybody? Why would I waste anybody’s time if I knew there wasn’t going to be a quorum?

Q: And Mike White’s one of those council members who doesn’t show up. He also missed 10 meetings?

A: “Yes, that’s a given. What does he care? He’s got his hotel job. He doesn’t need to show up at the County Council. He doesn’t take it seriously and he’s the chair of the council. It’s wrong. It needs to stop.”

“That’s why we need the new people to get voted in otherwise the same stuff will happen. It won’t change. Hopefully, people will vote for the Ohana candidates and myself because we literally could change things and put us on a different path. 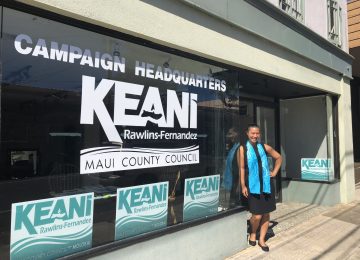 Posted by Jon Woodhouse - October 18, 2018 0
For many years Maui County Council Member, Stacey Crivello, who is running for reelection next month, has positioned herself as…

Posted by Jon Woodhouse - February 20, 2019 0
Of all the politicians campaigning for the 2020 presidential election, Hawaii Congresswoman Tulsi Gabbard is the most outspoken anti-war candidate.… 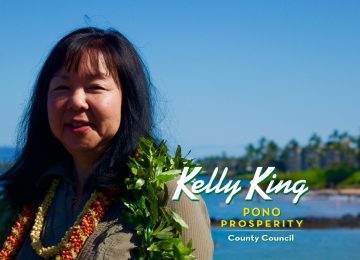 Posted by Mark Sheehan - November 8, 2018 0
Since statehood, political power on Maui has resided with resort, development and agribusiness interests.  Through their campaign donations and backroom support,…

Posted by Jon Woodhouse - October 11, 2018 0
This November’s mayoral and Council election finds Maui at a critical crossroads. Voters could allow the old guard, in the…

Posted by Jonathan Greenberg - October 31, 2018 0
What brought you to politics? I’ve been a community servant and leader for well over 35 years. My aloha for…