Passed by a majority of the Maui County Council, the 7 charter amendments on the November ballot, were authored by Kelly King, Shane Sinenci, and Keani Rawlins-Fernandez. Only Yuki Lei Sugimura and Riki Hokama voted against putting any of  the amendments on the ballot, while Tasha Kama voted no on four amendments, including those for council term limits and setting up an agriculture department.

“All seven of the charter amendments were vetted by the County Council and approved by a super-majority of the members,” says Councilmember King. “They were fine-tuned during multiple council committees and council hearings and some have been worked on and discussed for a decade. The Council shaved nearly $47 million off the budget this year. We are not a body that spends taxpayer dollars frivolously. Changes in term limits, charter appointees and legal processes would reduce corruption.”

Term Limits for Council Members/ Term Limits for Mayor – This has definitely ignited panic by the old guard scrambling to hold on ad infinitum, and maintain their control. Under the provision Council members would only be able to serve five two-year terms, and the mayor would be limited to two terms. Prior to the effective date of this amendment any terms of office served will not be counted toward the term limits.

Kelly King says these new limits are essential because, “we want to pass the torch at some point, and need new ideas and leaders.” Office of the Managing Director – Supporting the amendment, State Representative Tina Wildberger explains it will help remove political favoritism out of the highest ranks of our county government. “Maui County has a chance to bring its governance out of the plantation era and into the 21st century with a professional manager overseeing our various departments outside the four year political cycle,” she says. “It’s a great path toward more efficient, responsive, accountable government.”

It is critical that Maui has greater accountability in government. This can be achieved by having a hired managing director, versus one who is politically appointed. Maui County would benefit from a professional manager who is hired based on professional qualifications and experience, not political connections.”

The new managing director would need specific qualifications, such as five years experience in an administrative capacity in the public or private sectors.

Nationwide, about 45 percent of counties with populations of more than 100,000 have a council-manager system of government, Dave Mora, a senior adviser for the International City/County Management Association told Maui’s Special Committee on County Governance in 2015.

At that time in 2015, former state Rep. Tony Takitani on the Committee reported: “We’re going to have to get a little bit more information about what works and what doesn’t work in the present system.” Five years later Takitani still seems to need more information as he just told Hawaii Public Radio, “I don’t think it’s anything that is properly examined. It’s not common at all to change the structure of government.”

This is the amendment that prompted major dark money lobbying, directly threatening the mayor’s power and ability to fill county positions where cronyism can come into play. It will require the mayor to give explicit annual goals to the managing director, and post them on the County website for Maui’s citizens to see how county priorities are being interpreted Transparency will create accountability for the mayor’s performance where none exists now.

Fearing loss of control, Mayor Michael Victorino in his Maui News “Our County” column, slyly stoked pandemic fears, claiming we’ve “been distracted by COVID-19,” to understand the implications of the amendments. Voicing his opposition he claimed, “you’re giving others the power to say who will govern us and how we’ll be governed.” Rolling out the old guard in in No ads

As far as any increasing cost argument, King points out, “we do have a managing director and deputy managing director right now. This will not be a new position but probably a higher level position.” And by not having a constant turnover the County will save money. “There are proven cost savings,” King says.

Department of Agriculture – Introduced by Council Member Shane Sinenci, and supported by the majority of the Council, this is a contentious amendment that has evoked the ire of the establishment.

“The proposed County Dept. of Agriculture will support Maui farmers who are working hard to increase local food production and reduce our dependence on mainland imports,” says King.

Sinenci told The Maui News that he envisioned a smaller department to start, which could cost as low as $700,000 to establish and operate on a budget under $2 million in line with smaller departments. In oppositon, Maui County Farm Bureau president Teena Rasmussen made the wild claim that it’s “projected by its proponents to cost at least another $5 million to $10 million per year to fund it.”

In describing the importance of creating the new department Sinenci points out: “The primary function of the department is to develop a sustainable, regional agricultural system for Maui County,” and increase opportunities in agriculture, while “boosting resident’s health and food security,” and “promote healthy eco-systems.”

On Facebook, Sinenci posted – “A Department of Agriculture will transition us out of plantation era practices, increase the County’s sustainability and begin to build a resilient economy. The Maui Central Plains has been the site of mass sugar and pineapple operations during the late 1800’s to early 1900’s. It was a lucrative venture for the plantation owners and for Maui County by building affordable homes at Century City and by establishing a symbiotic economy.

“But that era in Maui’s history is over and tourism has taken its place. However, that choice has proven unsustainable with no affordable homes, massive waste, more foreign investments funneling profits out and additional stressors upon our resources and infrastructure. We are at a pivotal juncture in our story to re-think the ‘plan’, strategize for our own resiliency and invest in the next 7 generations.”

False claims disseminated by the Maui County Farm Bureau argue that the department just creates another layer of needless bureaucracy for farmers.

“Now is the time to evolve county government,” King urges. “I personally support all seven Charter Amendments on the general election ballot this November, especially the initiative that will establish a professional Managing Director. Ironically this is the one amendment that dark money is targeting the most. It is clear that the purpose of their campaign is to mislead rather than educate, while hiding the identity and motives of those behind it. I speak from experience in administration and strategic planning when I say the Managing Director charter amendment will create important systemic improvements that will bring more efficiency, continuity and transparency to our county, ultimately saving money in the long run and taking a lot of the politics out of local government.” 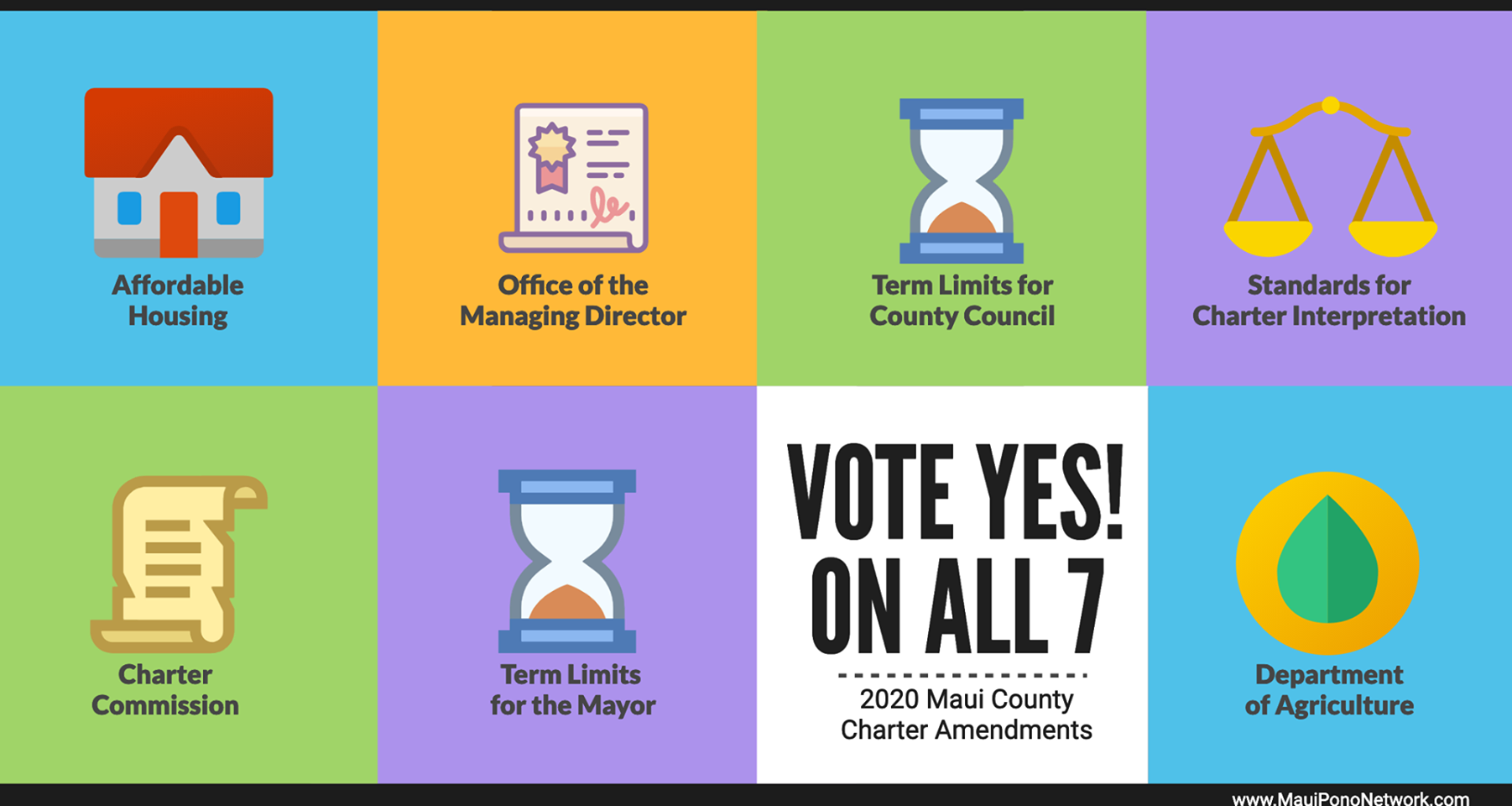