Yahoo News recently reported that the agro-chemical giant Monsanto (now known as Bayer) had been close to being charged with a felony by the Justice Department for illegally spraying a banned pesticide on Maui in 2014.

The highly toxic pesticide, methyl parathion, was sprayed on July 15, 2014, across two acres of GMO corn and wheat growing in Kihei, close to homes and beaches.

The article’s authors, Adam Zagorin and Nick Swellenbach, reported how, “the felony case against Monsanto was halted after the company’s lawyers launched a last-minute appeal to the office of then-Deputy Attorney General Rod Rosenstein, according to sources close to the case.” The charge was reduced to a misdemeanor.

How common is it for a felony charge to be reduced to a misdemeanor? “It happens infrequently, usually when deep-pocketed clients hire well-connected former senior Justice Department lawyers to press the argument,” explains Adam Zagorin in a Maui Independent interview.

The well-connected former senior Justice Department official in this case is Alice S. Fisher, who is also alleged to have played a part in keeping Jeffrey Epstein’s controversial plea deal secret from his young victims more than a decade ago. Fisher is a managing partner of the Washington, D.C. office of Latham & Watkins LLP. She served as an Assistant Attorney General in the Department of Justice Criminal Division from 2005 to 2008, and in 2017, she was interviewed for the post of FBI Director.

Zagorin, a former senior correspondent at TIME magazine, is a Senior Fellow and Journalist-in-Residence at the non-profit Project On Government Oversight. He became intrigued by the Maui/Monsanto case after discovering an internal April 2019 government document that the felony decision was overruled.

The Yahoo News article reveals: “Quite a few people involved believe this was clearly a felony involving a deadly, banned pesticide, with significant collective knowledge and evidence to bind the company to the violation,”

said one longtime expert briefed on the situation, who requested anonymity because of the sensitivity of the matter.

Posts on the Facebook page “Maui’s Dirty Little Secrets,” run by environmental activists, helped blow the whistle on Monsanto’s illegal activities on Maui.  “The Facebook page played a role in presenting the issue publicly, but the discovery itself was based on the taking of photographs of the Monsanto spray log, where the company itself documented the spraying,” says Zagorin. “Word of the spraying first appeared on the Internet in 2014, shortly after the event occurred.”

The banned pesticide in question, methyl parathion, was originally developed by Germany’s IG Farben in the 1940s, which also created sarin nerve gas. Parathion has been used as a chemical warfare agent. A teaspoon of methyl parathion will kill you. In the US more than 650 agricultural workers have been poisoned by the dangerous pesticide, with 100 dying.

Parathion and related organophosphorus pesticides are used in thousands of poisonings annually, especially suicides. It is known as “schwiegermuttergift” (mother-in-law poison) in Germany.

In 1998, the Environmental Working Group called on the Environmental Protection Agency to ban methyl parathion in all foods consumed by children. The EWG estimated 320,000 children between the ages of one and five years old were eating an unsafe dose of the toxic insecticide in their food every day. And more than 55,000 of those children exceeded the safe dose of methyl parathion by a factor of ten or more each day, while 2,400 children ages one through five exceeded the safe daily dose by more than 100-fold.

The EWG indicated that methyl parathion is so toxic a five-year-old could not eat an apple with any detectable level of the pesticide on it without being exposed to an unsafe dose.

“When a family gathers around the kitchen table, it should know that the food it eats is as safe as it can be,” said EPA administrator Carol Browner when she announced a methyl parathion ban on December 31, 2013.

So how come Monsanto was still spraying it on Maui in 2014 without any oversight? The company even reported its use – fraudulently as a restricted use pesticide – in a report to Maui County.

The Maui’s Dirty Little Secrets Facebook page reported in 2016 that Scott Enright, the Director of the Hawaii Department of Agriculture, spoke to a group in Kihei, who were concerned about Monsanto spraying the banned pesticide. Enright said that they were aware of the situation, and that Monsanto “will be cited.” They were never cited.

It also noted, “that repeated attempts to get Senator Roz Baker to help us address this (issue) went unanswered. Apparently she does not care that Maui residents were potentially exposed to a banned nerve agent. How she continues to get reelected is astonishing as she continually protects Monsanto at the expense of her Maui residents and keiki.”

Before the EPA ban methyl parathion was listed as a restricted use pesticide which should not be sprayed in winds above 10 mph. “But weather data show the wind on July 15, 2014, on Maui was blowing at an average of more than 18 mph, gusting to more than 23 mph, potentially sending the highly toxic substance well beyond the target zone,” reported Zagorin and Swellenbach in Yahoo News.

“The wind data, as presented in the story, confirms that it was above the 10 mph limit for spraying it noted in its labeling,” notes Zagorin. “But that labeling was conceived prior to the end of 2013, the point at which any spraying… no matter the wind speed, was banned.”

As Bayer faces a mountain of lawsuits over Monsanto’s ubiquitous Roundup allegedly causing non-Hodgkins lymphoma, including potential cases in Hawaii, the Maui pesticide case is just one more example of how major corporations use their influence to deflect federal oversight and censure.

One of the lawsuit victors who successfully sued Monsanto/Bayer, DeWayne “Lee” Johnson, recently toured the islands hosted by the Hawai’i Center for Food Safety and the Protect Our Keiki coalition. He spoke to Maui lawmakers on June 17. “I got a job with a school district in California,” said Johnson who was awarded a $289 million judgment against Monsanto (later reduced to $78 million). “I started to have symptoms and things got worse and I fund out I was diagnosed with non-Hodgkins lymphoma. I looked into it and I found out other people had been exposed and paid off and silenced. We went to court and won. I’m proof that there is something wrong with this product.”

After Johnson spoke to legislators on four islands, the Department of Education’s Superintendent Christina Kishimoto, sent a memo to all principals emphasizing that herb­icides like Roundup are banned at all Hawai’i public schools.

According to a new St. Louis Post-Dispatch article Monsanto faces being sued by more than 18,400 plaintiffs. “For sure, there’s a speed bump with the glyphosate litigation, but that’s not going to last forever,” said Liam Condon, president of Bayer’s crop science division in St. Louis.

Monsanto’s prevailing strategy has been to attack and diffuse any criticism of Roundup. New Food Economy just revealed an email communication between University of Illinois biochemist Bruce Chassy and Monsanto executive Dan Goldstein, about a letter posted by Zen Honeycutt on the Moms Across America website: “The funniest part about the letter is how it says my children got better when I fed them organic,” wrote Chassy. “There you have it. That’s your enemy. Beat the shit out of them and put them on the defensive and you won’t have this problem.”

Monsanto’s Goldstein responded: “I have been arguing for a week to beat the shit out of them and have clearly lost. We don’t want to be seen as beating up on mothers, nobody will listen to it anyway, it has to be done by third parties, it’s an industry problem not a Monsanto problem.”

What will happen now that Monsanto only faces a misdemeanor charge for illegally spraying methyl parathion? “That has still to be worked out,” says Zagorin. “But penalties under the misdemeanor statute will presumably be less than under a felony charge.”

Zagorin says that in exposing Monsanto’s illegal actions on Maui he hopes, “to shine at least some light on what happened in the case. What happens after that is up to readers and concerned citizens in Hawaii and elsewhere.” 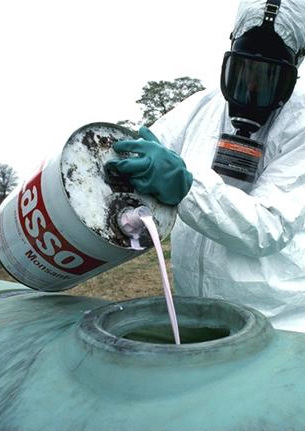