A major victory for Maui Ohana candidates in Tuesday’s election is likely to signal a sea change in direction for Maui’s County Council. Even though former council member and old guard Mike Victorino defeated Ohana candidate Elle Cochran in the mayor’s race, a majority of Ohana candidates were ushered into power in the Council.

“I’m humbled, honored, and excited not just for me,” says Keani Rawlins-Fernandez, who beat once-popular incumbent Stacey Crivello for the Molokaʻi seat. “We got the majority on the council, which is amazing, and we almost have a supermajority of women (6 of 9 memebrs). Maui County is definitely leading the way.”

With a majority of like-mind members on the council, Keani sees the possibility of a dramatic turnaround in how the county operates, in stark contrast to the dominant inaction of the past.

“We’re not going to be stalling anymore,” she emphasizes. “We’re going to get down to work, and we each bring a different skill set and experience, and all of that will compliment each other. We all are very action-oriented. We want to get things done and that’s why we ran in the first place. For me, one of my biggest frustrations in the last few years was how much stalling occurred, like with polystyrene containers. It could have been passed so much faster, but that was not what the (council) majority wanted. They held it off as long as possible.

“It’s really unfortunate that Elle didn’t win, but I hope Victorino fulfills his campaign promises because he adopted many of Elle’s. He said he would support some kind of manager model and have professionals lead the departments. And that was one of Elle’s really big talking points. We can hold him accountable to that. Next year will also be the first time as a council that we get to approve all of the directors. I hope Victorino will be as collaborative as he claims. If we can work together I see a lot of good things happening. He claims to want more affordable housing and that’s what we want. I see us building affordable housing right away.”

“There are all kinds of social/economic problems because of a lack of affordable housing. Residents are leaving and having to live in their cars. And I hope he follows through on cracking down on illegal vacation rentals.”

“The voters came out and they spoke loud and clear,” she affirms. “Tasha Kama, Tamara Paltin, and Kelly King won by such a landslide. Kelly was the highest vote getter. I had a more challenging job of unseating an incumbent, but the voters came out. They demanded change. They said they are tired of business as usual and are willing to take a chance on us as new elected officials.”

With Mike White retired, Keani would love to see Kelly King as chair of the council. “I would absolutely support Kelly as our chair,” she says. “Kelly knows how to run an effective, efficient meeting and remain professional. It would be the best fit.”

At the age of 35, Keani is likely one of the youngest politicians to ever serve on the Maui council, which has tended to reflect an older, more conservative demographic.

“I’m by far the youngest council member,” she notes. “Historically they’ve been always around 50 or over. One of the reasons I ran was to encourage our younger generation to run for office. You don’t have to wait until 50. And I wanted to represent their voices and be someone the younger generation can relate to.”

“We were very clear as candidates that this was our vision and priority,” she says. “The fact that we were voted in speaks to our community’s vision and priorities that were in alignment with our vision. In 2016, we gained Kelly and Alika, but we were in a minority. Our community needed their hope restored and I hope this election will combat the apathy we’ve been experiencing. I want to make government easier for community members to participate in. I’ve been spending of the day thinking about all the bills I plan to propose to fulfill that with more outreach and education.”

Feeling hopeful about the future of Maui she concludes: “In 2014 when people came out and voted for the (GMO) moratorium and it wasn’t upheld it hurt a lot of people.  It was such a betrayal of trust that a lot of people refused to come out in 2016. I feel hope was restored with this election.”

Joining her on the council is a group of candidates feeling empowered to lead change.

As an Ocean Safety Officer for the county, Tamara Paltin has made protecting our environment a priority, as well as increasing the supply and demand for locally grown agriculture, and emphasizing sustainable tourism.

A former member of the Hawaiian Sovereignty Advisory Commission, Tasha Kama’s activism for social justice has continued with her work through Faith Action for Community Equity in addressing affordable housing and immigration issues.

And as one of the co-founders of Pacific Biodiesel, which recycles waste cooking oil into renewable fuel, Kelly King will continue to represent South Maui. Supporting regenerative and organic farming practices to foster healthy soil for both food and fuel crops, she also supports smart growth and affordable housing.

King is a brilliant rising star in Maui politics. She received 30,855 votes for County Council in the latest election. That’s more than any other council candidate has EVER received during a midterm (non-presidential) election, and 3,500 more votes than Mayor-elect Mike Victorino.

The coming year may not only see Kelly King as chair of the County Council but also, allied with new Ohana slate reformers like Keani Rawlins-Fernandez, the leader of the most effective team of progressive solution-implementers in Maui government history. 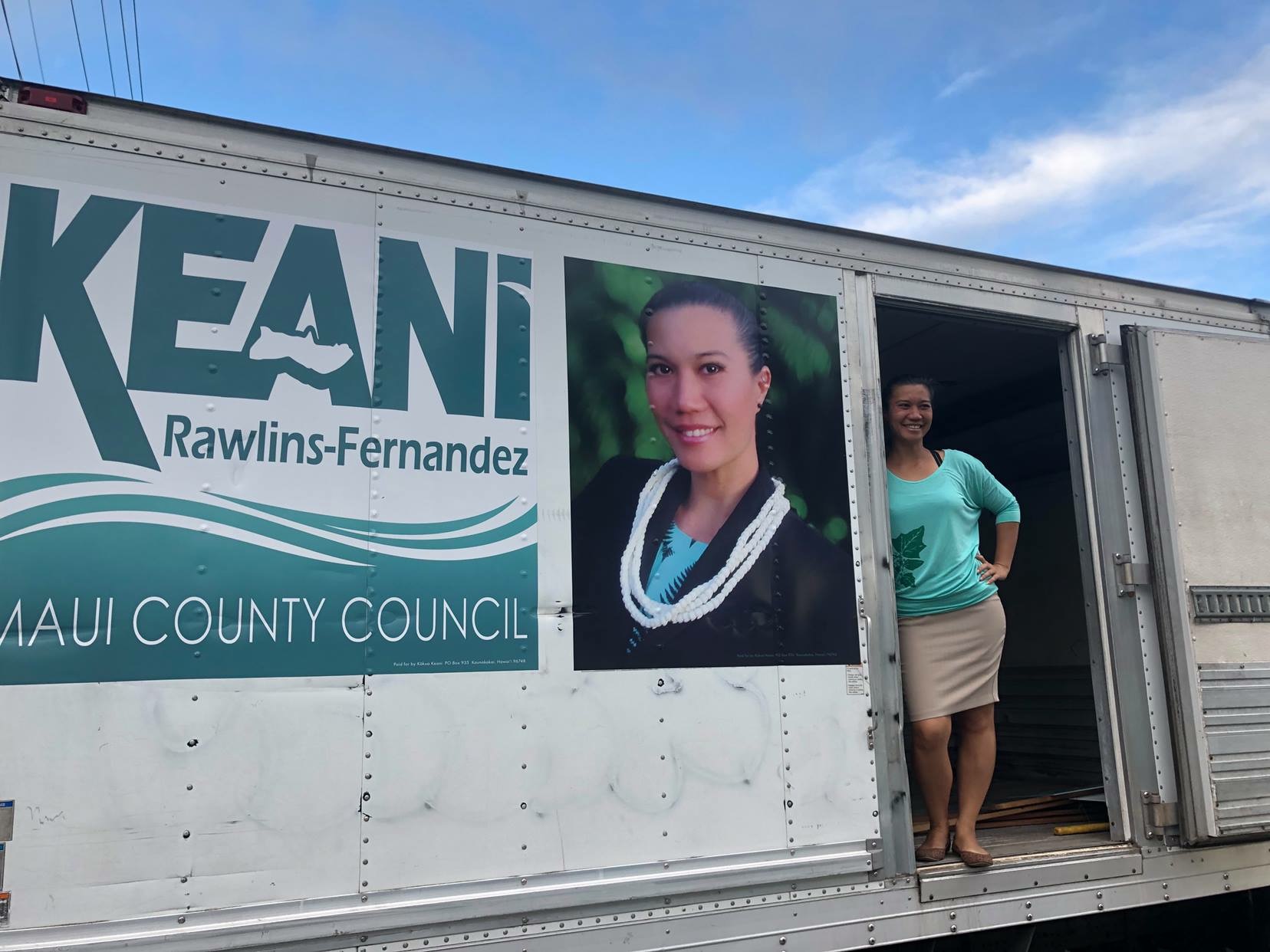