Ever since the launch of the early cell phone systems, the telecom industry has assured consumers that they are safe. While a few maverick scientists wondered if exposure to radiofrequency radiation from cell phones could cause cancer, government agencies charged with overseeing our health, have consistently supported the industry’s position.

Funded by the cell phone industry, the results of the first major studies, run by epidemiologist George Carlo, shocked top officials. In a closed-door meeting in 1999, Carlo reported there was a link between the phones and brain tumors. The information was suppressed.

Now we face an even bigger threat with the rollout of the next generation of mobile phones, known as 5G (for fifth generation), with likely dire consequences for the planet.

Last year Gov. David Ige signed a bill allowing the deployment of next-generation wireless broadband infrastructure in Hawaii. Currently Honolulu has 5G infrastructure installed in two locations. There are presently no 5G installations on Maui. It is predicted we’ll see 5G on Maui within five years.

The governor announced the bill “establishes a process for the co-location of small wireless facilities by communication service providers on state and county-owned poles.” The bill specifies that the state or county involved in permitting will notify an applicant “within 20 business days of receiving an application” whether it’s complete; shall notify an applicant of the basis for a denial on or before “the day” it’s denied; and opens a 90-day window for the applicant to address deficiencies without an additional fee.

An editorial in the Honolulu Star Bulletin praised the bill’s passage. “The future of Hawaii depends on 5G wireless broadband,” it began. It neglected to include any reference to health concerns.

According to Burt Lum (host of HPR’s Bytemarks Café), who recently spoke on Maui, Hawaii’s counties have the ability to oppose permits for “small cell” towers.

On July 27, a nationwide 5G Day of Action will be held to raise awareness and call on wireless companies to suspend deployment of small cell wireless antennas until exposure to 5G wireless radiation can be proven safe. On Maui a rally will be held at 10:30 a.m. in front of the Queen Ka’ahumanu Center. A petition to halt 5G deployment is available at http://keepyourpower.org/

Despite community opposition almost everywhere that 5G has been proposed, the telecom giants have successfully promoted the safety of cell phones, continuing to fund studies friendly to their interests. An analysis in 2007 discovered that industry-funded studies were two and a half times less likely than independent studies to find any health effects.

“Everyone knows that if your research results show that radiation has effects, the funding flow dries up,” reported Dariusz Leszczynski, adjunct professor of biochemistry at the University of Helsinki in an interview in 2011.

It took until 2011 for the first publicly released study to show significant health issues. Published in the Journal of the American Medical Association, cell phone radiation was found to cause biological effects in the human brain other than heating (thermal effects).

Finally, in 2018, the $30 million US National Toxicology Program/ National Institutes of Health study concluded that there is, “clear evidence of carcinogenic activity” in male rats exposed to radio frequency (RF) radiation from cell phones and wireless networks.

The study’s alarming results prompted the FDA to rush into damage control, declaring, “these findings should not be applied to human cell phone usage,” because it was based on rats. The agency obviously seemed to forget that they had actually commissioned the study on experimental animals so as to, “provide the basis to assess the risk to human health.”

According to a petition signed by 236 scientists worldwide, who have published more than 2,000 peer-reviewed studies, 5G will result in “massively increasing” the general population’s exposure to radiation.

Why is 5G so potentially problematic? Because 5G radiation can only travel short distances, it requires antennas installed approximately every 250 feet. “You can imagine small cells on every tenth utility pole in a neighborhood,” Spirent Communications’ VP Saul Einbinder told Forbes.

“Industry is going to need hundreds of thousands, maybe millions, of new antenna sites in the United States alone,” warns UC Berkeley researcher John Moskowitz. “People will be bathed in a smog of radiation 24/7.”

So basically we’re all about to take part in a massive human experiment courtesy of the telecom industry, promoted by our government, and encouraged by agencies like the FDA and FCC, who kowtow to the phone giants.

Some communities are standing up and trying to halt the 5G invasion. When the city of Brussels in April halted a 5G pilot project, the Belgium Environmental Minister Céline Fremault announced: “The people of Brussels are not laboratory mice whose health I can sell at the cost of profit.”

The Brussels region has a particularly strict radiation standard for telecom applications and Fremault reported the 5G project was not feasible with the current radiation standards. “We cannot leave anything to doubt,” she added.

In Europe the precautionary principle governs policies relating to the environment, health and food safety. When scientific uncertainty exists the principle aims to prevent harm before a hazard has come into existence.

The Swiss government in May announced they will apply the precautionary principle to 5G mobile communications and tighten existing laws in the face of new scientific evidence on health risks. And it set stricter installation limit values for sensitive areas likes homes, schools, hospitals, offices, and playgrounds. “Clear questions exist linked mainly to cancer of the nervous system,” reported Michel Matter, vice-president of the Swiss Medical Association.  According to a recent survey by the magazine L’Illustré, 54% of Swiss citizens believe that 5G could be damaging to their health.

No such safety limits exist in America where the telecom giants are working overtime to blanket the nation in higher levels of electromagnetic radiation. And Hawai’i’s Senator Brian Schatz is helping lead that onslaught.

“Developing and deploying 5G technology will provide more Americans with access to the internet while giving us the opportunity to continue our global leadership, foster innovation, and create millions of new jobs,” Schatz announced in 2017, when he introduced a resolution in support of deploying 5G technology across the nation.

In June, Senator Schatz introduced legislation to update the Communications Act to promote quicker small cell deployment, which basically mandates that all communities must agree to allow installation of thousands of 5G antennas across neighborhoods within 60 days of application. Opposed by the National Governors Association, it’s unlikely to pass.

Dr. Martin Pall is one of the distinguished scientists warning about the health risks posed by 5G. A Professor Emeritus of Biochemistry and Basic Medical Sciences at Washington State University, Dr. Pall has spent years focusing on the mechanisms of chronic inflammatory diseases and how various stressors initiate cases of such diseases.

“Putting in tens of millions of 5G antennae without a single biological test of safety has got to be about the stupidest idea anyone has had in the history of the world,” he reported.

Dr. Pall has predicted, “there will be major ecological disasters as a consequence of 5G.” He also suggests it will lead to an increase in eye problems (cataracts, detached retinas, glaucoma and macular degeneration), kidney dysfunction, and, “fetuses and very young babies may be a special risk for impacts of 5G.”

His concerns are echoed by Dr. Martin Blank of Columbia University’s Department of Physiology and Cellular Biophysics. “We have created something that is harming us and it is getting out of control,” he says. “The levels today (of electromagnetic radiation) are damaging the living cells in our bodies and killing many of us prematurely.”

Dr. Ben-Ishai, a physicist from the Hebrew University of Jerusalem, discovered that human skin acts as a type of receptor for 5G radiation, absorbing it in like an antenna. The researchers noted, “we are raising a warning flag against the unrestricted use of sub-THz technologies for communication, before the possible consequences for public health are explored.”

The new fifth generation of mobile data promises data rates up to 100 times faster than the current 4G and instantaneous transfer. This will enable the development of device connectivity – a revolution that will see for example vehicles communicating with each other in traffic, and the rollout of the Internet of Things.

5G operates in a range of frequencies known as the millimetre wave band. Because millimetre waves travel by line of sight, it can be blocked by physical objects like buildings and trees. It has been projected that it will cost hundreds of billions of dollars to fully set up the 5G network nationwide.

5G promises to generate huge profits for the wireless companies, with as much as $250 billion in service revenue expected annually by 2025.

The heightened radiation exposure of 5G is alarming. An engineer in Palo Alto, California, measured the differential between average and peak radiation readings of 5G antennas finding they may be higher than the 100x to 1000x more than measured with 4G communications.

Published in 2017 by an international group of concerned scientists, the BioInitiative Report suggested an appropriate radiation guideline. “A scientific benchmark of 30 µW/m² for lowest observed effect level for RF microwave radiation is based on mobile phone base station-level studies. Applying a ten-fold reduction to compensate for the lack of long-term exposure (to provide a safety buffer for chronic exposure) or for children as a sensitive subpopulation yields a 3 to 6 µW/m² RF Microwave Radiation exposure guideline.” NOT 1,230,000 µW/m²!

At a Senate Commerce, Science and Transportation Committee Hearing on Feb 6, 2019, Connecticut Senator Blumenthal inquired about health and safety of 5G. He stated, “I believe that Americans deserve to know what the health effects are? How much money has the industry committed to support independent research? We’re talking about research on the biological effects of this new technology.” An industry representative responded: “There are no industry backed studies to my knowledge right now.”

In March, FCC Chairman Ajit Pai informed federal lawmakers that 5G is safe. A pro-industry advocate for less regulation, Pai used to work for Verizon. The FCC has not updated its regulations regarding radiofrequency safety since 1996.

In forcing local communities to adopt 5G, Pai pronounced: “The FCC must aggressively use its legal authority to make sure that local governments don’t stand in the way of broadband deployment.”

While the telecom industry, which will make billions on this new technology, says don’t worry 5G is safe, we need to ask, do we really want to be part of a global experiment with unknown consequences?

Dr. Pall warns:  “We have no biological safety testing of genuine 5G radiation. Therefore, we have no risk analysis or risk management because we have no risk assessment whatsoever on 5G. The FCC is not only willing to allow such completely untested exposures, but has also been has been aggressively pushing to promote installation of 5G antennae. In a world where shocking behavior has become less and less shocking, the U.S. situation is mass insanity.” 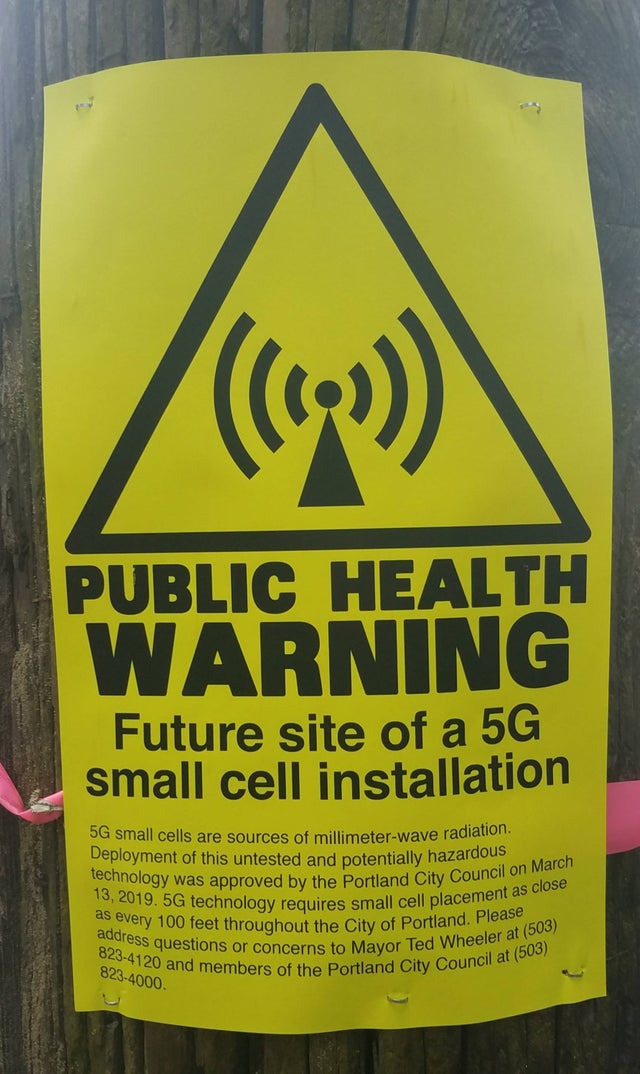