The devastating impact of pesticide poisoning on Kauai by the agro-chemical industry is highlighted in the groundbreaking documentary “Poisoning Paradise,” screening at the Maui Film Festival on June 23, at 10 p.m. at the Celestial Cinema in Wailea.

Award-winning investigative journalist Paul Koberstein describes Kauai as, “one of the most toxic agricultural environments in all of American agriculture.” In a shocking report in Cascadia Times, he describes how the seven highly toxic pesticides most commonly used by the GMO giants on Kauai (alachlor, atrazine, chlorpyrifos, methomyl, metolachlor, paraquat and permethrin) are known to be toxic to plants and wildlife. The Hawaiian island has more unique species – species that live only on this one island – than anywhere else in the world.

Directed and produced by Keely Shaye Brosnan, Teresa Tico, and actor Pierce Brosnan, “Poisoning Paradise” focuses on the ecological dangers of intensive pesticide applications and exposes the collusion between federal and state legislators to encourage the world’s largest biotech companies to utilize Hawaii, and particular Kauai, to grow genetically engineered seeds and crops, as a means of stimulating the state’s
economy.

Long known for his environmental activism Pierce Brosnan has reported: “I think genetically modified food is going to change the planet completely and to have someone like Monsanto… who is Monsanto? Just the name alone becomes this gross, kind of amalgamation of greed; it doesn’t bode well. You feel it acutely when you live on the islands…you feel it acutely when you’re surrounded by farmers and people who
grow their own food.”

Corporations including Syngenta, Pioneer DuPont, BASF, and Dow Agrosciences on Kauai, have applied hundreds of tons of restricted use  pesticides on thousands of acres across the Garden Island’s West Side.

Among those interviewed in the documentary, environmental activist Robert Kennedy Jr. points out: “No one knows what these chemicals will do to humans. Nobody has ever proved them safe.”

“Each of us has a responsibility to protect our land, our water, our oceans and the air we breathe for future generations,” emphasize filmmakers Keely Shaye Brosnan and Teresa Tico.

The film suggests that we can’t rely on our established politicians to bring about needed change. It’s up to us, the people, to raise our voices in unison, decrying the destruction of Hawaii’s land by these insidious global corporations.

“It has been peoples’ movements that have always changed the world,” emphasizes world-renowned scientist Shiva Ayyadurai in the film. “It hasn’t been the Democratic party or the Republican party. It’s been people.”

Interviewed by Bay Area TV station KTVU, Keely Shaye Brosnan reported: “We think we’ve put together an informative, insightful and provocative film about the subject matter. What’s happening on Kauai is simply a microcosm of what’s happening to the rest of the world.”

“People have to fight back and say enough,” added Pierce Brosnan.

Director/producer Keely Shaye Brosnan is an award-winning broadcast journalist turned award-winning documentary filmmaker. She lives part time on Kauai with her husband Pierce Brosnan, who is most known for playing iconic British spy James Bond in four films between 1995 and 2002. He will receive the Pathfinder Award at the Maui festival.

Director/producer Teresa Tico is a Hawaii based attorney and film producer. She is nationally recognized for her work in the natural resources case, Pflueger v. Marvin, which resulted in the largest EPA fine against an individual polluter in U.S. history. In 2000, she turned her legal skills to film production, producing the environmental documentaries “Learning To Sea,” “Going To Antarctica,” and “Fishing Pono.”

“Poisoning Paradise” will screen on June 23 at 10 p.m. at the Celestial Cinema in Wailea. 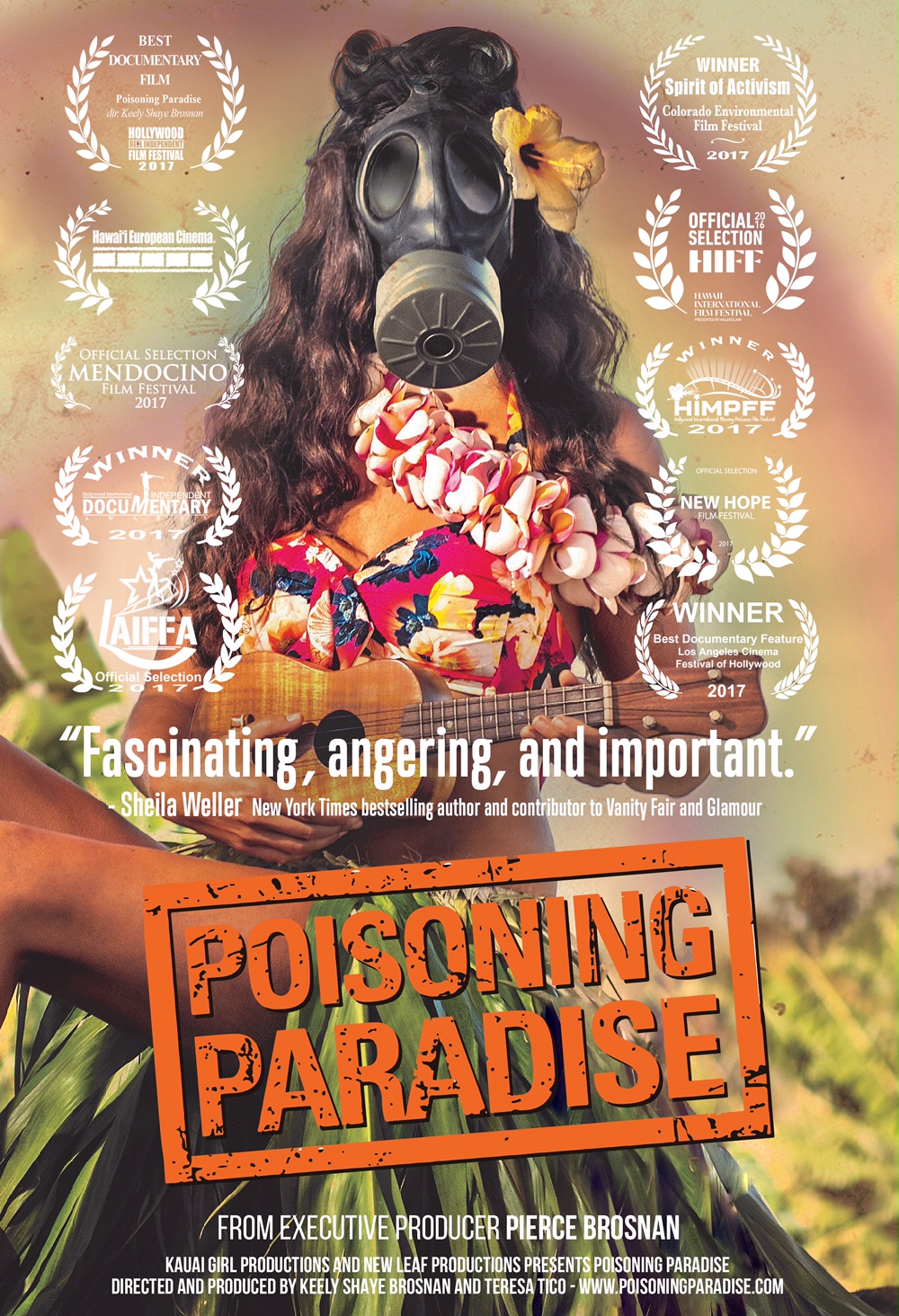