Hawai’i’s new pesticide bill passed last week made our state the first in the nation to ban the neurotoxic pesticide chlorpyrifos. State legislators managed to pass this historic legislation in the face of intense pressure from the agrochemical industry, which has relied on  corrupted science and media misinformation to unduly influence representatives and agencies in County, State and federal government.

In testimony to the Hawai’i state legislature urging the bill’s rejection, Monsanto spokesman Dan Clegg suggested that pesticides like chlorpyrifos that they spray on Maui fields had been evaluated for safety by the Environmental Protection Agency (EPA) after “review of more than 100 studies on human health and the environment that are required before a pesticide is registered for use.” He added, “We are committed to safety for our communities and safety for the environment.”

Clegg neglected to disclose that EPA scientists concluded in 2015 that the pesticide should be banned.

Dow AgroSciences, which manufactures chlorpyrifos, has declared: “No pest control product has been more thoroughly evaluated, with more than 4,000 studies and reports examining chlorpyrifos in terms of health, safety and environment.”

Such misleading statements fly in the face of independent research which has uncovered shocking results. “Even at exquisitely low doses, this compound would stop (rat brain) cells from dividing and push them instead into programmed cell death,” reported Theodore Slotkin, a scientist at Duke University Medical Center. “There doesn’t appear to be any period of brain development that is safe from its effects.”

The EPA normally establishes the amount of pesticide residue in produce, grains, and processed food that is considered tolerable based on animal tests paid for and conducted by the manufacturers.

As far as human health studies, EPA science adviser Richard Hill reported in 1999, “We have no test guidelines in regard to humans.” And the Environmental Working Group’s Melissa Haynes, pointed out that human-based studies for pesticides could never attract enough subjects to give the results any statistical validity.

In 1999, Dow AgroSciences conducted a controversial human experiment where 60 men and women in Nebraska were given capsules of chlorpyrifos to measure its possible toxicity. Paid $460 for their efforts they were informed, “low doses of these (cholinesterase inhibitor) agents have been shown to improve performance on numerous tests of mental function.”

As noted by Dr. Alan H. Lockwood, a Professor of Neurology at the University at Buffalo, in his 2004 critical report “Human Testing of Pesticides: Ethical and Scientific Considerations,” “it is misleading to imply participation might improve intellectual function.”

Fast forward to 2009 and the EPA’s own “Ethics Review of Chlorpyrifos Human Toxicity Study,” which determined the Nebraska study violated their ethical conduct standards and concluded the EPA “is forbidden to rely on the study.”

Chlorpyrifos belongs to a class of pesticides called organophosphates, that includes nerve agents like sarin gas.

The toxicity of chlorpyrifos has been studied extensively in animals, while epidemiologic data is limited. Case–control studies have shown increased risk of non-Hodgkin lymphoma (Waddell et al. 2001) and glioma (Lee et al. 2005) among male farmers exposed to chlorpyrifos.

In attempting to minimize his company’s use of chlorpyrifos on its Maui GMO fields, Monsanto’s Clegg told The Maui News that they only use products containing chlorpyrifos on an as-needed basis. While Monsanto’s official 2016 report to the County (which seems to be the most recent) indicated they annually employed 33 gallons of chlorpyrifos, the third highest volume of all the Restricted Use Pesticides they sprayed on crops.

Hawaii is banning chlorpyrifos because studies have shown it causes neurological damage. The Columbia Center for Children’s Environmental Health found that: “Even low to moderate levels of exposure to the insecticide chlorpyrifos during pregnancy may lead to long-term, potentially irreversible changes in the brain structure of the child.”

Decades of research into the effects of chlorpyrifos strongly suggests that exposure at even low levels may threaten children, with some children being exposed to levels up to 140 times the safety limit through diet alone.

In 2000 chlorpyrifos was removed from store shelves and banned from home use, because animal research had found it caused brain damage in baby rats. Ignoring the damning research Dow disingenuously reported they only stopped its residential use because it “no longer made business sense,” with Dow’s vice president Elin Miller stating: “This does not change our conviction in the safety of chlorpyrifos for all labelled uses.”

Under President Barack Obama, the EPA proposed in 2015 to revoke all uses of chlorpyrifos on food, a move taken in response to a petition filed by the Natural Resources Defense Council and the Pesticide Action Network North America.

The EPA’s decision was based on studies including those of the Columbia Center for Children’s Environmental Health. “The EPA’s assessment is that the (CCCEH) study, with supporting results from the other 2 U.S. cohort studies and the seven additional epidemiological studies reviewed in 2015, provides sufficient evidence that there are neurodevelopmental effects occurring at chlorpyrifos exposure levels below that required for AChE inhibition.

“The agency is proposing to revoke all of these tolerances because EPA cannot, at this time, determine that aggregate exposure to residues of chlorpyrifos, including all anticipated dietary exposures and all other non-occupational exposures for which there is reliable information, are safe.”

With the Trump administration taking power, that critical decision was reversed.

“We need to provide regulatory certainty to the thousands of American farms that rely on chlorpyrifos, while still protecting human health and the environment,” EPA head Scott Pruitt said in a statement. “By reversing the previous administration’s steps to ban one of the most widely used pesticides in the world, we are returning to using sound science in decision-making — rather than predetermined results.”

“Pruitt’s decision is a repudiation of junk science – some funded by the EPA itself – that environmental activists have used to push unwarranted and counterproductive regulations,” declared Angela Logomasini of the right-wing think tank American Enterprise Institute, which has attacked pesticide regulation.

In response Environmental Working Group president Ken Cook said in a statement. “The chance to prevent brain damage in children was a low bar for most of Scott Pruitt’s predecessors, but it apparently just wasn’t persuasive enough for an administrator who isn’t sure if banning lead from gasoline was a good idea. Instead, in one of his first major decisions as head of the EPA, like a toddler running toward his parents, Pruitt leaped into the warm and waiting arms of the pesticide industry.”

The rollback of pesticide regulation has been spearheaded by Nancy B. Beck, a top deputy at the E.P.A.’s toxic chemical unit. Beck is a former executive of the American Chemistry Council (ACC), the powerful chemical industry lobby whose members include Monsanto, Dow Chemical, DuPont, ExxonMobil Chemical, Chevron Phillips Chemical and Bayer. At the ACC she attacked the EPA, arguing that the government too often directs burdensome rules at what she has called “phantom risks.” A House committee once called her out for “very disturbing” attempts to undermine EPA assessments of toxic chemicals.

The decision to deny the petition faced scrutiny because the CEO of Dow Chemical, Andrew Liveris, had been appointed by Trump to a White House manufacturing working group, and his company subsequently donated $1 million to Trump’s inauguration fund. And EPA chief Scott Pruitt met with Liveris 20 days before denying a petition to ban Dow’s chlorpyrifos.

Pruitt has also controversially  announced he is considering revising the federal prohibition that prevents youth under the age of 18 from applying pesticides or performing “early-entry” work in areas where pesticides were recently applied.

With the federal government avoiding the implementation of critical pesticide regulation it’s been up to individual states to enact their own legislation drawing on relevant studies of human health impacts. Professor Terence Centner of the University of Georgia’s Department of Agricultural and Applied Economics, published an exhaustive review of chlorpyrifos’ toxicity in the journal of Environmental Toxicology and Pharmacology in January (2018) – “Cancelling pesticide registrations and revoking tolerances: The case of chlorpyrifos.”

Prof. Centner noted: “The scientific evidence considered by the EPA indicated that existing tolerances do not protect people from unsafe levels of chlorpyrifos. Under the Federal Food, Drug, and Cosmetic Act, tolerances need to be revoked if they do not protect human health.

“By 1974, its danger to humans was recognized as disclosed by a petition for tolerance levels  (EPA, 1974). In In 1997, it was recognized that some indoor uses of chlorpyrifos were unsafe  (EPA, 2002). Given this information, the EPA was able to have registrants of products containing chlorpyrifos agree to cancel their registrations in 2000 (EPA, 2000a).

“Depending on the level of cholinesterase inhibition, chlorpyrifos exposure can result in a spectrum of symptoms ranging from nausea, dizziness, confusion and death (EPA, 2002, 2011).

“In 2014 and 2016, panels of EPA scientists evaluated studies of human health risk assessments for chlorpyrifos. They found that exposure was negatively affecting humans: there is evidence of delays in mental development in infants (24–36 months), attention problems and autism spectrum disorder in early childhood, and intelligence decrements in school age children who were exposed to (organophosphates) during gestation (EPA, 2016b).

Professor Centner concluded: “For political reasons, the EPA has declined to acknowledge the scientific evidence that shows chlorpyrifos exposure is harming children. By not taking actions to revoke chlorpyrifos residues in or on food, the EPA is compromising the integrity of the country’s food products. The politicization of pesticide regulation may be expected to marginalize the country’s scientific and public health prowess.”

The toxic impact of chlorpyrifos in the islands hit the headlines in 2016 when 10 Syngenta field workers on Kauai became sick and ended up in hospital after entering a chlorpyrifos treated field before the required 24 hour waiting period had passed.

The EPA under the Obama administration had initially proposed to fine Syngenta $4.9 million. In February, Pruitt’s EPA dropped that fine to just $150,000.

In December the Food and Drug Administration released test results that found chlorpyrifos residues on more than 50 different food crops. A study published in the American Journal of Public Health showed that living within 2600 feet of an agricultural area increased the risk of brain cancer two-fold, with astrocytoma (a type of cancer of the brain)  increased by 6.7 fold.

A 2001 study by Texas A&M University researchers showed that pesticides can volatilize into the gaseous state and be transported over long distances fairly rapidly through wind and rain. A U.S. Geological Survey report also published in 2001 reached similar conclusions, finding, “After they are applied, many pesticides volatilize into the lower atmosphere, a process that can continue for days, weeks, or months after the application, depending on the compound.” 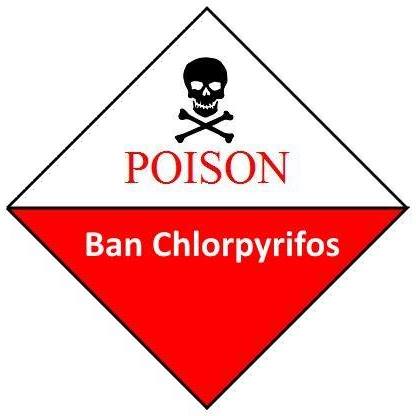