Ever since a new wave of progressive politicians was elected to the Maui County Council the old guard has struggled to maintain power. In their latest Machiavellian tactic to suppress the influence of new members and especially the outspoken Native Hawaiian water protector Alika Atay, Council Chair Mike White is introducing a new bill that would allow a majority of Council members to fire other Council members’ staff that they deem to be a threat.

If the amendment to “Section 2.08.050, Maui County Code, Pertaining To Legislative Branch Organization” is passed, a narrow majority of the notorious “Gang of Five” – Mike White, Riki Hokama, Stacy Crivello, Bob Carroll and Yuki Lei Sugimura – would effectively wield control over other Council members and have the ability to neuter their effectiveness.

Clause a.1. of the proposed bill reads: “Council executive assistants shall serve under a council member, and shall have terms of employment that coincide with the term of the supervising council member unless sooner terminated by the council member having direct supervision or by a vote of council.”

In other words: The majority can fire whoever you hire for any reason it wants.

In other words: any Council aide who is not an executive assistant can be fired whenever Mike White wants without anyone else voting for it.

In response, one council insider asked: “How does this impact our right to freedom of speech and expression, and our ability to alert the public of what is truly happening on the inside, behind closed doors?”

The chilling effect on local democracy is already being felt. “People are living in fear at being fired,” another insider noted.

In a statement to The Maui Independent, Council Member Elle Cochran, the top vote-getter in last year’s Council election, commented: “It concerns me that a majority council, who doesn’t see eye to eye with me on most things, could have the power to remove my staff and support system. This has huge ramifications for members who are working on progressive legislation that challenges the status quo.”

“If five members don’t care for an employee, personally or because of their political beliefs, they would have the power to remove them from their position without due process,” Council Member Elle Cochran said. “I was voted into this office to represent the needs of my constituents.  I employ like-minded and capable staff to assist me in that responsibility.  If other members can terminate my staff, they are effectively terminating my ability to fulfill my duty as a public servant.”

Sensing encroachment on his power and influence, and lacking any authority to do so, Mike White, has threatened council members to bring their assistants to heel. He’s cut off access to the 7th floor for certain individuals, had doors locked, and covered windows where the 7th floor staff could possibly be accessed by 8th floor staff.

To add insult to injury Council Member Alika Atay and his staff discovered that they had lost email and voicemail access to their Office of Council Services staff for the Water Resources Committee. Emails were being rerouted and not delivered to intended recipients. When Atay confronted the Council’s IT specialist about the issue he was told to talk to Mike White.

So far three of Atay’s Water Resources Committee meetings have been cancelled without any communication to him, effectively derailing his influence to stand up what Native Hawaiians refer to as the “old guard” regime.

The trail of skullduggery appears to stem from inquiries by Alika Atay’s assistant Brian Bardellini about County budget grants that he believed merited greater oversight. Bardellini reports that White instructed Office of Economic Development department head Tina Rasmussen to stop communicating with him.

On October 16, White informed Atay that he needed to fire Bardellini. Atay refused.

Standing up to suppressive tactics Alika Atay declared, “I have a strong intention of addressing the issues for our people, protecting the ‘aina, taking care of our people, addressing our issues of homelessness with government accountability and transparency and ending corruption.”

In a public statement Atay submitted to the Council right before the Friday hearing, Atay wrote: “We believe Mike White’s threats are likely related to millions of dollars of mishandled tax money that Mr. Bardellini has become aware of and is investigating. While Mr. Bardellini may be passionate, intense, and energetic, he has never been violent or hostile.”

“Mr. Bardellini was and is my campaign chair. Moreover, his policy, legislative analysis, government accountability and budget work in the office is indispensable to my duties as an elected official.”

“My agenda as a Councilmember is to advance progressive goals; this is just one in a series of oppressive tactics to undermine those goals.”

“I cannot and will not support the subversion of democracy.”

Circumventing the democratic process, as County Chair, Mike White has quashed bills he dislikes. At least twice – including a minimum pay bill – he has voted no on a bill in the committee stage and refused to schedule them on the council’s agenda.

Both The Maui Independent and Maui Time have previously reported on White’s Machiavellian tactics. Three days before Christmas last year, with no notice or even the proper authority to act, White terminated years of unblemished service of three of the four senior staffers who comprise Maui County’s County services office.

Declaring that “White’s thirst for power remains unquenched,” Maui Time cited how he seized control of the council in January 2015 through what then-Council Chairperson Gladys Baisa called a “coup,” allegedly orchestrated by him and Council members Don Guzman and Riki Hokama.

We reached out to Mike White for comment but received no response.

White’s suppressive “Legislative Branch Organization” amendment will be presented to the Council for committee referral on Friday morning, December 1, at 9 a.m.

The address for Council meetings is 200 South High Street in Wailuku, and there will be public comment before this new proposal is voted upon. Everyone concerned about democracy on Maui is urged to attend. 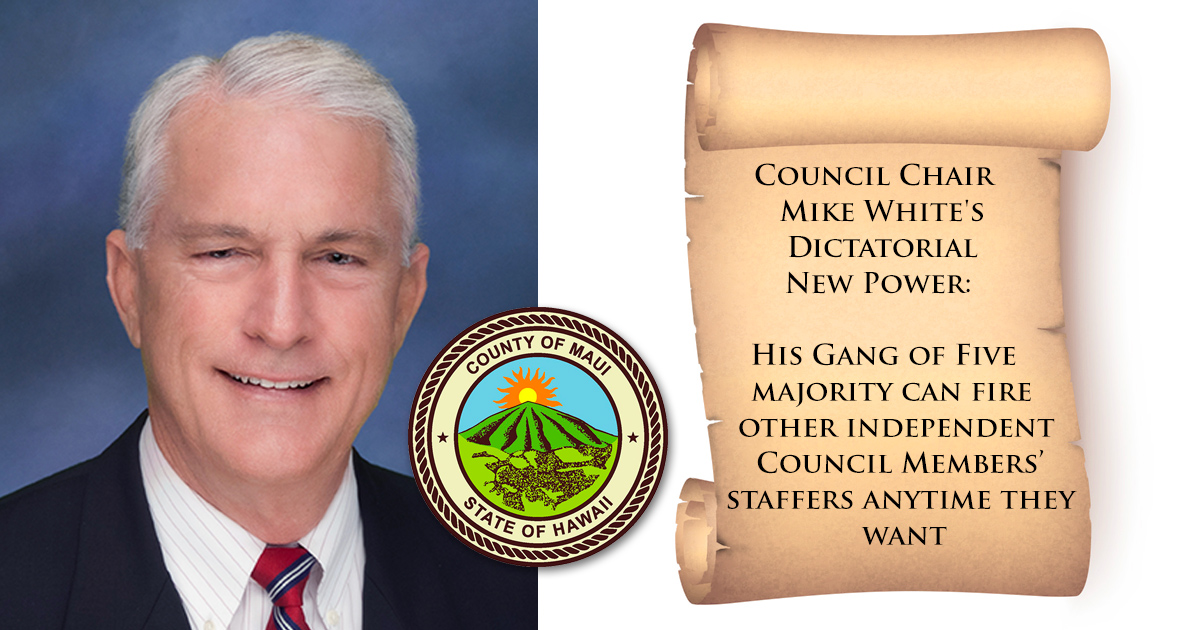