Hopes ran high for a proposed bill that would have helped inform and empower Hawaii’s residents about the impact of toxic restricted-use pesticides. But House Bill 790 sank after pushback from the powerful biotech industry and resistance from the old guard.

“The lawmakers who opposed this measure should be ashamed,” says Ashley Lukens, director of the Hawaii Center for Food Safety (HCFC). “The broader purpose of the bill was to create more transparency around something as important as the toxic chemicals which are sprayed every day in our environment. It died because of the incredible influence multi-national corporations like Monsanto and Syngenta continue to have over our legislative process.”

One of the most alarming aspects of the bill’s disappearance is that not one member of Hawaii’s political leadership came out in favor of it. And we don’t even know the tally of the politicians who actually helped kill it, as there is no public record.

One lawmaker on the record for voting against the measure is Rep. Dee Morikawa, who represents the west side of Kauai, home base for Dow Chemical, Syngenta and DuPont-Pioneer’s GMO seed operations.

“This badly written bill died because it would have hurt the ag industry large or small,” reported Morikawa in The Garden Island, who must have missed the section of the bill that limits its impact to large-scale operations (not small farms) employing more than 10 pounds or 10 gallons of restricted-use pesticides annually.

The much-needed bill would have required chemical companies to give advanced notice before spraying pesticides known to cause adverse effects on the environment around schools, hospitals, and care facilities. Hawaii lags behind other states in implementing mandatory reporting. California has required full reporting of agricultural pesticide use since 1990.

Although HB 790 received public endorsement and passed through three committees, the House effectively killed it by using a secret procedure to avoid a vote on March 9. This recommitted the bill back through another hearing process to the House Consumer protection and Commerce Committee, led by West Maui’s Rep. Angus McKelvey.  A few days later, after facing criticism over amendments made to the bill, the House voted to remove McKelvey from the chairmanship of the consumer committee.

Sound confusing? That was intentional. Recommitting a bill back to committee is a procedural way to kill a bill without being accountable to constituents for a clear vote. “This happens all the time and people don’t notice,” explains HCFC’s Lukens. “This time everybody was paying attention, and the bill got so much media coverage. People are waking up and learning the game—and not allowing these politicians to pull the wool over our eyes.”

But Speaker Joe Souki stated this was just business as usual. “We’re always secretive,” he recently told Civil Beat. “It’s part of being a legislator.”

Right before HB 790 died, Civil Beat posted a diatribe by former Bank of Hawaii chief economist Paul Brewbaker, deploring proposals to regulate pesticide use in the state. He complained about “pointless regulation” and decried it as a form of “Salem Witch Trials.”

Brewbaker neglected to mention that the Environmental Protection Agency sued Syngenta Hawaii in December for violating numerous regulations meant to protect its Kauai workers, after 10 were hospitalized.

Dr. Lee Elvsin, a retired pediatrician on Kaui, responded by pointing out the fallacies in Brewbaker’s argument, noting that chlorpyrifos, the second most heavily sprayed RUP on Kauai, is facing a ban by the EPA because of prenatal toxicity concerns.

A study published in the British medical journal The Lancet Neurology concluded that chlorpyrifos is among a dozen chemicals commonly found in the environment that “injure the developing brain” of children.

An EPA ruling was expected to be made by March 31, 2017. If passed, all agricultural uses of chlorpyrifos would cease in the U.S., though there is concern the Trump administration might block any ban. According to recently filed lobbying records, the Dow Chemical Company, which manufactures chlorpyrifos, contributed $1 million to Trump’s inaugural committee.

Against the advice of his own chemical safety experts, on March 29, the new head of the EPA refused to ban chlorpyrifos. “We are returning to using sound science in decision-making — rather than predetermined results,” said Scott Pruitt.

This neurotoxin is sprayed in Maui County by Monsanto. The biotech giant reported they doused 141 acres with chlorpyrifos in 2015.

The most widely used pesticide on Monsanto’s Maui fields is atrazine, an endocrine disruptor banned in Europe last year. A recent EPA risk assessment on atrazine concluded it also poses a potentially serious ongoing risk to birds, mammals, and fish.

“Ultimately, I am extremely confident the people will prevail,” says the HCFC’s Lukens. “This particular bill might have been killed, but the leadership from representatives like Kaniela Ing, Chris Lee, and Matt LoPresti will make sure the concept behind this legislation does not die. The story of 790 is not over.” 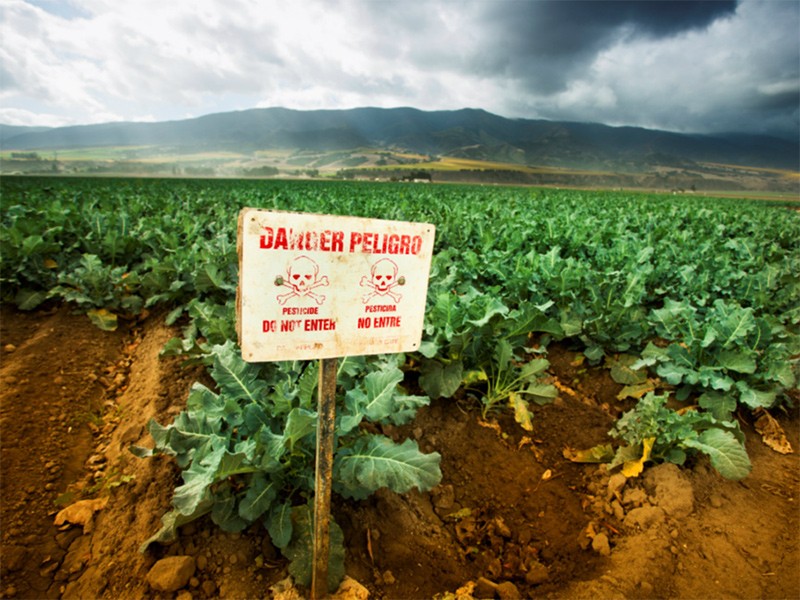